I’m so excited to share the cover for the third book in the WARREN THE 13TH trilogy, WARREN THE 13TH AND THE THIRTEEN-YEAR CURSE. During my last school tour with illustrator Will Staehle, there was a lot of speculation among the students over what color the final book would be. So if you guessed blue, you win a virtual pudding cookie! 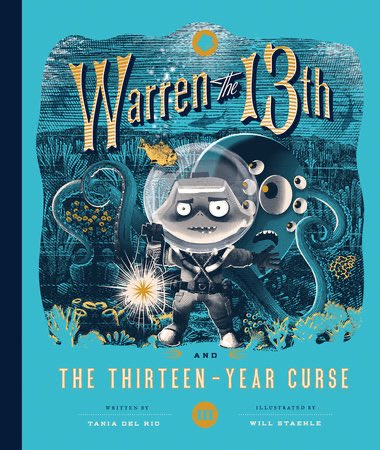 The book comes out on March 24th, 2020 and the description is as follows…

**(mild spoilers for those who haven’t read the first two books!)**

At the end of the second book in the Warren the 13th series, the Warren Hotel had transformed into a giant ship and set sail for the open seas! When Warren the 13th and the 13-Year Curse opens, Warren is adjusting to the demands of running a floating hotel and is planning his 13th birthday party when disaster strikes–the hotel is shipwrecked on a strange island. To make matters worse, his octopus-like friend Sketchy is kidnapped by a traveling circus! Warren and his friends must solve a series of riddles to find the next location of the circus and rescue their friend before it’s too late. Along the way, they meet a delightful new cast of characters, including elderly pirates, a sea witch, a talking clam, and a giant sea monster. As Warren pursues Sketchy’s kidnappers, he will learn the truth of his friend’s mysterious origins–as well as one final secret of the Warren Hotel.

You can preorder the book now via:
Amazon
B&N
Indiebound
Warren Book 2 and Other Updates Quarantine Update