I’ve been buried in work, hence the lack of updates, but with one week to go, I wanted to write a quick post about how NaNoWriMo is going so far… and it’s been going great!

I’m slightly behind my target word count at the moment, but that’s because I took a couple days off to go on a mini birthday trip last week. (Wine tasting! I brought my computer along, but I discovered that wine tasting and writing do not necessarily mix).

Anyway, I’m not worried about catching up; I can see the finish line on the horizon, and it is beautiful.

In past years, I’ve dipped my toe into the world of NaNo, but have never made much progress. I think I know the reason why it’s never worked for me until now… and that’s active participation.

Being a part of NaNoWriMo is more than just meeting your word count every day. It’s about taking part in the community – posting on the message boards, making writing buddies, and, most importantly, showing up for events in person.

I’m a freelancer. I work from home. I am an introvert at the best of times, and a recluse at the worst of times. Until now, I’ve never deigned to remove myself from the comfort of my writing chair to partake in any of the numerous NaNoWriMo write-ins or other events. Why?

Well, honestly, going to a place to mingle with people I don’t know is pretty low on my list of things I like to do. But this year I told myself I would force myself out of my comfort zone and attend some write-ins.

And, you know what? I found I really enjoyed them. Yes, at first it was a little uncomfortable sitting at a table with a bunch of strangers, attempting to make polite smalltalk. But, week after week, I’ve gotten to know some of these strangers, and even look forward to seeing them.

I enjoy the energy of productivity that fills the room during a writing sprint or word war.

It’s impossible not to get a lot done on your project when you’re propelled by the clacking of dozens of other keys around you!

And the support and camaraderie of the other writers around you is equally important. Every time we do a half-hour word war (in which you write as much as you can during that time and compete to have the most words in order to win a prize), I consistently come in last, or almost-last.

In each half hour block, I usually only manage around 500 words, 800 if I’m on fire. Meanwhile, other people around me are racking up words in the 1000s. Just check out this scoreboard pic that I nabbed from my ML: 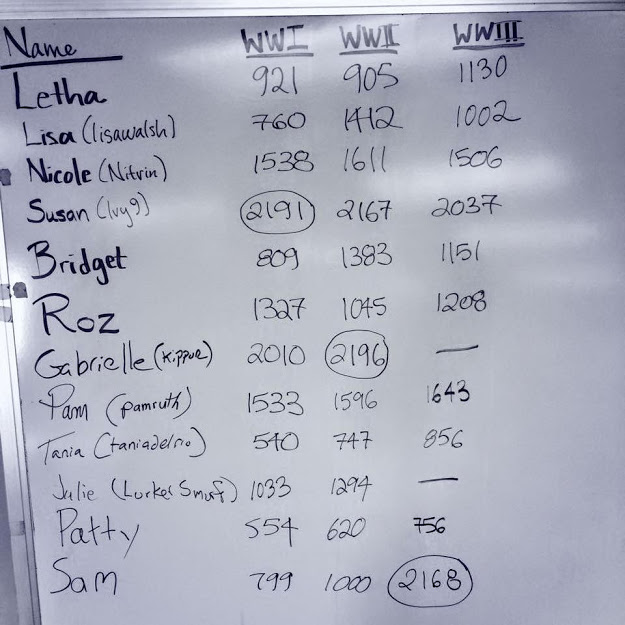 It’s a little shameful when you have to announce your lowly word count in a room filled with people with robotic-speed fingers, but not once has anyone made me feel bad about it. In fact, everyone cheers me on whenever I manage to up my word count from the previous round.

Being a writer can be lonely work, and even for a hermit like myself it’s important to get out there and be among other writers.

It’s because of all these awesome people that I’ve met so far that I’m going to win NaNoWriMo this year. So, for any of you who’ve tried it in the past, and didn’t quite meet your goal, don’t be discouraged. Put yourself out there and you might be surprised how easy it can be!