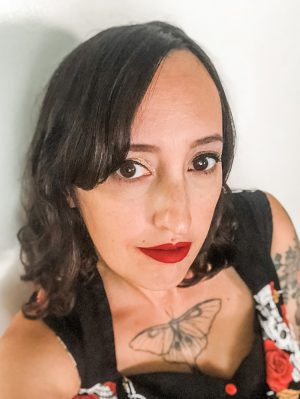 Tania del Rio is a professional writer and artist who got her start writing and illustrating comics, primarily for a young audience. Her clients include Archie Comics, Dark Horse, and Marvel; she is best known for her work writing and drawing the 42-issue manga-inspired run of Sabrina the Teenage Witch: The Magic Within. She is also the author of the WARREN THE 13TH middle grade series published by Quirk Books. She lives in Los Angeles with her husband and two dogs.

Hi! My name is Tania del Rio and I’m a graduate of the Minneapolis College of Art and Design with a BFA in animation. In 2003, my manga entry, Lovesketch, was selected to appear in TOKYOPOP’s Rising Stars of Manga Anthology, Volume 2.

This soon led to my next gig, working for Archie Comics as the writer and artist of Sabrina the Teenage Witch, a monthly comic that was given a shoujo manga makeover in 2004. Over the course of 5 years I completed 42 issues, ending the series with issue #100.  It was recently re-released as a 4-volume graphic novel series! AOL Comics Alliance called Sabrina “One of the best and most underrated all-ages comics in the last 10 years.”

I am also the author of Diary of a Girl Next Door: Betty (The Riverdale Diaries), which is a new middle-grade illustrated novel published by Archie Comics!

I’ve also done additional work for Archie, such as art and writing on Sonic the Hedgehog, Josie and the Pussycats, Cheryl Blossom, and stories featuring the rest of the Archie gang. I’ve also done work for Marvel (Spider Man/Araña Special: The Hunter Revealed, Marvel Now What?! #1), and Dark Horse (Husbands Graphic Novel). I also edited a book called Mangaka America, a gallery and tutorial book featuring some of the hottest emerging North American manga artists of the time.

I had a popular webcomic, www.mypoorlydrawnlife.com, which is now available as a 400-page book

Most recently, I have written a middle grade trilogy, Warren the 13th, published by Quirk Books.